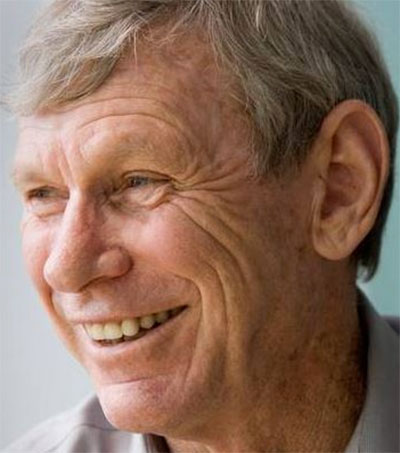 Sir Peter Snell, three-time Olympic champion on the track and arguably the greatest runner in the history of New Zealand athletics has died, aged 80, at his home in Dallas, Texas, where he lived for most of his later years, after working as associate professor at the University of Texas Southwestern Medical Centre. Ian O’Riordan reports for The Irish Times.

“[Snell] will unquestionably be remembered as one of New Zealand’s most successful Olympians on the track – winning three gold medals, first over 800m at the 1960 Rome Olympics, before doubling in the 800m and 1500m in the Tokyo Olympics in 1964. He also set two Olympic records at 800, and world records over 800m and over the mile, twice lowering it to 3:54.4, and then 3:54.1,” O’Riordan writes for the Irish newspaper.

“[He] had a relatively short career in athletics starting 1960 and retiring in 1965, but achieved so much and so impressively that he was voted New Zealand’s ‘Sports Champion of the Century’ and was one of 24 inaugural members of the International Association of Athletics Federations Hall Of Fame named in 2012.

“A protégé of the New Zealand athletics coach Arthur Lydiard, Snell also won two Commonwealth Games gold medals in Perth in 1962, again winning both the 800m and 1500m. Born in [Opunake] Taranaki, his family later moved to the Waikato, before he completed his schooling at Mt Albert Grammar. By the age of 19 he was concentrating on athletics, having originally excelled in tennis.

“In winning the 800m-1500m double in Tokyo, Snell became the only male to achieve this at the Olympics since 1920, and it’s not been achieved by any male at any Olympics since.

“His former world records of 1:44.3 for 800m (February 1962) and 2:16.6 for 1000m (November 1964), remain the New Zealand national records for these distances. His 800m record remains the fastest ever run over that distance on a grass track, and is also the oldest national record recognized by the IAAF for a standard track and field event.

“In his autobiography No Bugles, No Drums, written with Garth Gilmour, the inner sleeve reads: ‘On being asked to write something for the front flap of this jacket our blurb writer replied, “I’m not going to waste my time. Everyone knows master athlete Peter Snell and this is his story. Surely that’s enough”.’”

“His achievements are at the heart of New Zealand’s sporting history and have helped shape our national identity,” Stanley said. “The Golden Hour in Rome 1960 was followed by back-to-back gold medals at the Tokyo 1964 Olympic Games. These incredible races stand out in many Kiwis’ minds as among our greatest sporting achievements.”