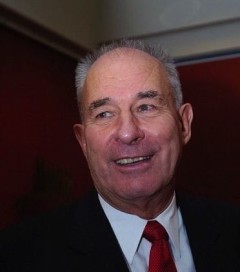 Sir Don McKinnon is the Supreme Award winner of the 2013 World Class New Zealand Awards, says scoop.co.nz. The annual award, made by Kea New Zealand on behalf of NZ Trade and Enterprise, recognises an extraordinary Kiwi who has excelled in their chosen field. Sir Don was honoured for his distinguished career in foreign affairs, including a record nine-year stint as Foreign Affairs and Trade Minister and eight years as Secretary-General of the Commonwealth. With a Nobel peace prize nomination, a knighthood bestowed by the Queen herself, and membership of the Order of New Zealand, judges said Sir Don was an obvious choice. ‘It would be hard to think of anyone more deserving of this honour than someone who has proven themselves constantly world class in 35 years of public service,” said John Stace, chair of judges and Kea Global board member. ‘Sir Don’s championing of New Zealand – as well as championing Kiwi ethics such as fairness and humanity for all of the world’s people – puts him into a league of his own’, Stace said. Sir Don entered Parliament in 1978, where he became the National Party’s foreign minister and deputy prime minister. Sir Don oversaw New Zealand’s election to the UN Security Council in 1993 and sent Kiwi peacekeepers to help calm trouble-spots. He also brokered an accord that ended a decade of civil war in Bougainville, Papua New Guinea, in 1997, for which he was nominated for a Nobel Peace Prize. In 2000 he left for the Commonwealth, where one of the big challenges of his Secretary-General role was wrangling a staff of 300 people from 50 different countries.’ You had an incredible number of different perceptions on how the job should be done,’ Sir Don said. ‘Everybody’s views would be different.’ During his time with the Commonwealth he came up against Zimbabwean President Robert Mugabe’s controversial rule and Fijian nationalist George Speight’s attempted coup. It was quite literally a 24/7 job, Sir Don said. ‘A leader would ring you up from the Caribbean and it would already be midnight in London. It was very full-on the whole time, and there was always a problem somewhere.’ Sir Don is now lending his experience to organisations including the NZ China Council, the Global Panel Foundation and the Waitangi National Trust Board. Kea New Zealand, who made the award, is a not-for-profit organization designed to motivate expatriate Kiwis and ‘friends of New Zealand’ to increase their contribution to New Zealand. Kea aims to contribute to the economic growth of New Zealand by helping New Zealand become the most globally connected nation in the world. With global headquarters in Auckland, Kea has offices in Shanghai and London. Kea also maintains a growing network of Kea chapters and other affiliated groups across the world. Kea is governed by a global board and was founded by Sir Stephen Tindall and Professor David Teece in 2001.