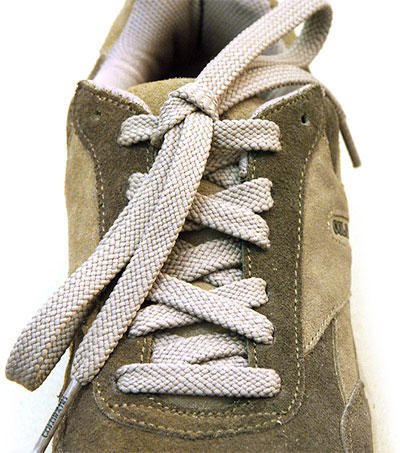 A new study explains why shoelaces keep coming undone – but it can’t explain why we’re stuck with a centuries-old fudge to fasten our trainers, according to the Guardian’s Gavin Hayes who talks to New Zealand shoelace expert, Ian Fieggen.

Yes, the spontaneous untying of shoelaces is merciless, random and irrecoverable – as Oliver O’Reilly, professor in mechanical engineering at the University of California, has proved in his new study. A Berkeley team used a mechanical leg and a human running on a treadmill to examine why the untying happens. They found that neither banging a leg up and down, nor simply jerking it forward made laces untie – it was the combination of the two that did so. The stomping of the foot relaxes the knot. The swinging of the foot acts like invisible hands to separate the outer ends of the laces. By then, cataclysm is mere seconds away.

On Ian’s Shoelace Site, Fieggen suggests a vast array of knots. The Secure is the highest-rated by his users. His own testing, he says, reveals it to be twice as sturdy as a standard knot.

“Regardless of the knot used,” Fieggen suggests, “Finish it off by pulling the knot nice and tight. Follow-up by pushing the bits in the centre of the knot snugly together to make the knot compact and secure.”

Fieggen laments a culture in which we have become increasingly inured to laces that come undone. He points out that the more rounded and the more plastic the laces, the more likely they are to untie. He suggests replacing anything too rotund with traditional flat laces, made from softer materials. He also recommends waxing with beeswax or rubber cement.

The key message here, though, isn’t about rubber cement – it’s about our common humility in the face of the vastness of knowledge. The next time your local pub pointy-head starts rambling about collateralised debt obligations, just remember he probably doesn’t even know how to tie his own shoelaces.