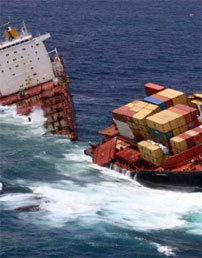 Ship Splits In The Rough

A Maritime New Zealand image of the stricken container ship Rena split in two features in the Seattle Post Intelligencer ‘News of the world in photos’ series. The Greek-owned ship ran aground on Astrolabe Reef off the coast of Tauranga on 5 October 2011, spewing heavy fuel oil into the seas in what has been described as New Zealand’s worst maritime environmental disaster. Cargo has now spilled from the ship and littered the Bay of Plenty coastline, while fresh oil has reached as far as the ecologically sensitive coast near Maketu.