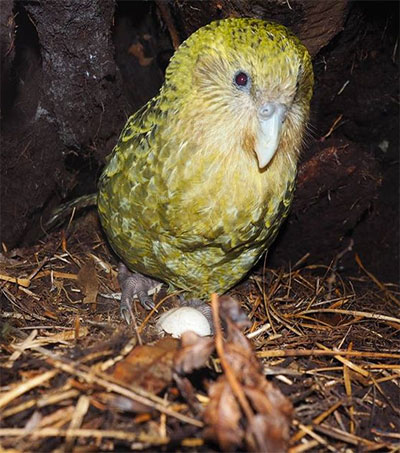 Saving the Strangest Parrot on Earth

It’s as plump as a goose, has the face of an owl and waddles like a duck. It sleeps in the day and is active at night. And it can climb just about anything but can’t fly anywhere. No wonder people call the kākāpō the strangest parrot on Earth.

Once found in large numbers all over New Zealand, kākāpō have been perched on the edge of disappearing for more than a century. What humans started, by reducing the birds’ habitat and food supply, predators such as cats, rats and weasel-like stoats nearly finished.

As of 1977, trackers counted just 18 kākāpō left in the entire country – all of them males. The end seemed in sight.

Then something amazing happened. A previously unknown kākāpō population was found. It included the first females seen in more than 60 years. This exciting discovery stirred government-led efforts to help the parrots by moving them to three small, predator-free islands.

“As the largest parrot on Earth, [they are] quite the sight in person,” said Wes Sechrest of Global Wildlife Conservation, which is helping the kākāpō recovery programme. “They have a teddy-bear quality to them with their soft feathers, wide eyes and owl-like expressions.”

Today the recovery programme counts 147 adult birds, nearly triple the number since its start in 1995. And that number will soon grow, as the current breeding season is expected to set a record and add 30 to 50 healthy chicks.

In Māori, “kakapo” means parrot and “pō” is night. Māori could have added “old”, because kākāpō can live 60 to 90 years.

And no two are alike. “Some are quiet, some noisy. Some are bold, some timid. Some run away from us, some approach us,” said Andrew Digby, the recovery team’s science adviser. “There’s no other bird – or animal – like them.”