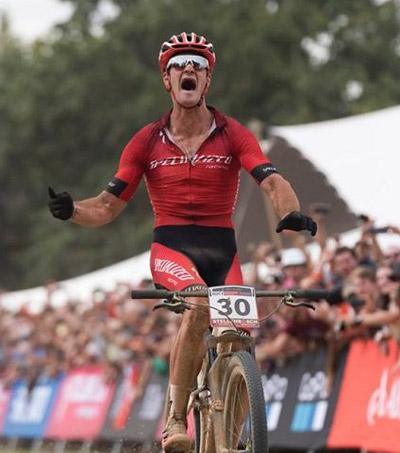 “The Kiwi fell to the ground at the end, half in agony, half in ecstasy after winning his first race as an elite athlete. He had been struggling with cramps for the last few laps, but the realisation that he had beaten Schurter, the Swiss superstar, who had gone unbeaten in all six legs of the 2017 World Cup, forced a smile through the pain,” reports the article.

“I was starting to cramp with a lap and a half to go. I was just pushing my way through. As we got closer and closer to the finish I knew I had to be in front. I went for it as we came over the bridge and it came off.”

“Gaze and Schurter had shadowed each other from the start, with the New Zealander, seeded 30th, having to pick his way through the pack to get to the sharp edge of the race,” reports the article.

“The two quickly established an exclusive group at the front”.  “Gaze moved ahead of Schurter in the final lap and put in a brutal attack on the five-time world champion halfway through the lap.”