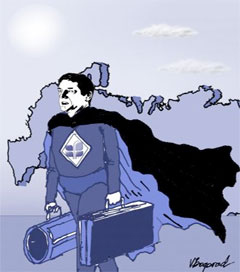 “The world of finance offers bigger stages, but none of its actors has so captivated an audience as [Stephen] Jennings did in Russia,” Bernie Sucher of investment bank ATON, writes for The Moscow Times after New Zealand-born Jennings made “his lonely exit through the doors of Renaissance Capital, the firm he led for 17 years.” “From the first day, Renaissance Capital was a high-wire act, a collection of colourful and super-aggressive money men banded together by vaulting ambition for wealth amid the land grab that was Russia in the 1990s. Jennings knew Russia was going to boom. With renewed audacity and determination to make history in his own way, Jennings rallied hundreds of new recruits to his banner, fielding teams and products in businesses where many of his competitors did not yet imagine there were markets. He is now bound for Africa, a continent buzzing with boundless possibilities for someone with his rare gifts. Watching him go, I say Russia has lost a true champion.”