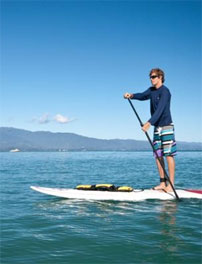 Ruminating On A Skirmish

While stand-up paddling above a grey stingray languishing in the tidal shallows of Golden Bay, Gadling’s Kyle Ellison ruminates on the violent history of the waters and its former name. “An expedition from the ships captained by Abel Tasman was met by a band of Maori curious of the boats which had suddenly appeared off their coast, and after a hostile skirmish, Tasman sailed from the area with four fewer men than he had arrived with. As a result of the incident, Tasman saw it fitting to label the area as ‘Murderer’s Bay’. On a brilliantly sunny and calm morning in which it was possible to stare straight through the turquoise waters, I found myself paddling in nearly the exact same spot where Tasman’s men had met their fate so many centuries ago.”