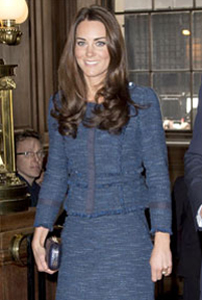 An indigo tweed skirt suit designed by New Zealander Rebecca Taylor was recently worn by the Duchess of Cambridge Kate Middleton when she stepped out for an event at Goldsmiths’ Hall in London. When it comes to royal outings, Middleton typically reaches for UK-based designers like Amanda Wakeley, Erdem, Matthew Williamson or, most famously, Alexander McQueen. “It’s something I have always wanted to do ever since she got engaged to William,” New York-based Taylor told NBC’s fashion blog Thread. “She always looks polished, chic, and feminine.” Unsurprisingly, the response has been overwhelming from a retail perspective. “I saw some articles that said the jacket sold out in thirty minutes,” Taylor said.