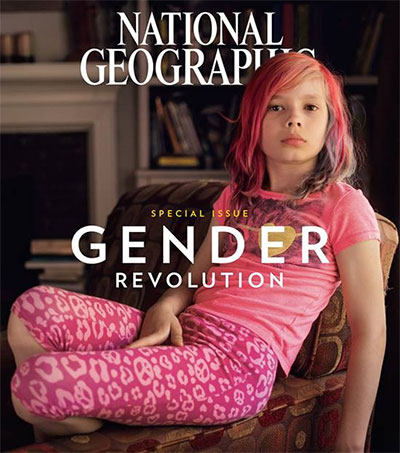 New Zealand-born photojournalist Robin Hammond’s image of transgender girl Avery Jackson, 9, has made the cover of the January 2017 special issue of National Geographic magazine on the shifting landscape of gender.

Avery, from Kansas City, is the first transgender person to appear on the cover of National Geographic.

The editor-in-chief of the magazine, Susan Goldberg, said: “The portraits of all the children [in the feature story] are beautiful. We especially loved the portrait of Avery – strong and proud. We thought that, in a glance, she summed up the concept of ‘Gender Revolution.’”

In an interview with Stuff, Hammond told journalist Philip McSweeney that he photographed 80 nine-year-olds across the globe to gauge insight into their lives, and the discrepancies hewn by location.

“[The project] began in Wellington,” Hammond said. “I tested the questions on nine-year-olds in New Zealand.”

He was then contacted by National Geographic, who were devoting their first issue of 2017 to the complexities of gender.

It has gained traction, with celebrities as renowned as Khloe Kardashian, Geena Davis and Amy Poehler celebrating the cover online. It has also had its detractors, McSweeney writes.

“Half of the comments on Instagram, where National Geographic posted it, were positive and supportive, but the other half … strident, explosively angered, at people identifying with a gender they weren’t assigned at birth,” Hammond told Stuff.

Because National Geographic is a mainstream magazine, he said, it has found its way into schools in America where Queer literature is not allowed.

“And that’s great, because it’s the young generation who are much more accepting than the old generation,” he said.

“Change is going to happen – it is happening – and it’s really great.”