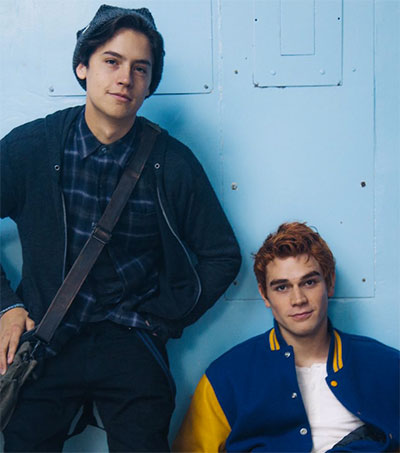 Riverdale Is a Guilt-Free Pleasure to Watch

“‘Archie got hot – he has abs now!’ An actual line in the pilot episode of Riverdale,” which is Toronto Star columnist Shinan Govani’s latest innocent viewing pleasure, he admits. The lead role of Archie is played by Aucklander, KJ Apa, 19 (pictured right).

“Like Gossip Girl meets Twin Peaks, as more than one critic has noted, the twisty noir spin on an old American comic is certainly that, but a meld of so much more: there’s a dash of Dawson’s Creek, a smidgen of Friday Night Lights, slivers of that ’80s hangout classic film Diner and even a whiff of a long-ago Peyton Place, TV’s original prime-time soap.

“Less aw-shucks than OMG, the Archie-Betty-Veronica-fest – already confirmed for another season on the CW and Netflix – is somehow also fun in the way it manages to combine sincerity with an enlivening meta-ness (‘You may be a stock character from a ’90s teen movie, but I’m not,’ a character slams at one point).

“Ok and another favourite thing,” writes Govani, “the particularity of the red hair sported by Archie, as played by Apa. It’s a very red red, adding to the comic-noir of it all. The actor tells Vulture he had to have his hair bleached and dyed once a fortnight to play the part.

“Nobody, really, was a ‘teenager’ until Archie and friends came along in the 20th century. And, here we are, back again.”

Apa will next star in Altar Rock, a thriller inspired by the Boston Marathon bombing in 2013 and directed by Speed cinematographer Andrzej Bartkowiak. The film is currently in post-production.