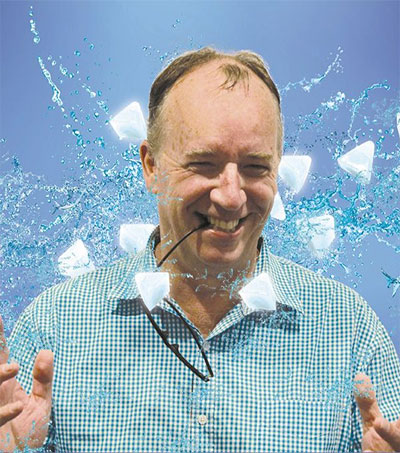 A four-generation family-owned ice business in Singapore has partnered with new local company Plink, founded by New Zealander Richard Hall, to launch what they call “the future of ice” – one filled many colours and flavours, as well as individually wrapped cubes.

Which may sound like a gimmick until you start to wonder where the ice in your drink comes from.

That was a question which dogged Hall, who was in the travel and airline industry for over 25 years.

Hall, 54, explains: “There’s been a number of surveys about fast food operators and the quality of ice they serve. It’s not so much the quality of the ice, but the way it’s handled. Putting hands in with the scoop and all that, to me that’s akin to someone putting their fingers in your drink.”

“So we started on this quest to make the safest ice possible – one you can open yourself, like a pack of butter on a plane,” and that’s how Plink came about.

For now, they produce a range of sealed portable ice trays made of recyclable plastic, with individually portioned ice cubes. Each tray has 15 pyramid-shaped cubes each containing 15ml of water.

So far, they’ve stocked Plink at over a hundred 7-Eleven outlets island-wide. In another month or so, these ice cubes will slowly become available at supermarkets as well.

According to Hall, they don’t intend to stop at just Singapore, either. By the end of this year, he aims to have it overseas as well – in Malaysia, the Philippines, the Middle East and Hong Kong.