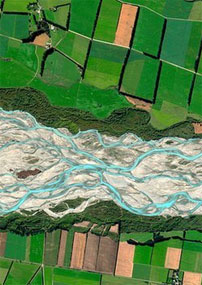 An image of the braided Rakaia River has won an online vote through Facebook for best satellite image of 2011. The image was captured by American commercial satellite imaging firm DigitalGlobe. The river, shown in March 2011, runs for about 150km to the Pacific. The picture of the twisting river beat other striking images of Ground Zero in New York, and Palm Island, Dubai, to claim the top spot.