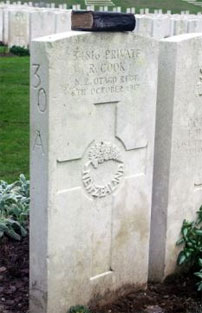 Return of One Precious Book

The bible of New Zealand World War One soldier Private Richard Cook, which he dropped as he came under heavy fire during the Battle of Messines in Belgium in June 1917, has found its way back to his family 94 years on. The bible lay buried for several months before being found by Private Herbert Hodgson, who credited it with saving his life and kept it until his own death many years later. Only moments after laying his hand on it, Pte Hodgson was knocked unconscious by a shell, but survived and credited the book for his luck. One of Hodgson’s three sons has flown 12, miles to New Zealand to hand it over to its rightful owners after they finally traced it back to Pvt Cook. Major Alister McColl, Pvt Cook’s great-nephew, said: “This means a great deal to us. It is not only a part of family history but it signifies the coming home of one of my family from long ago.” Private Richard Cook was from Colac Bay, Southland, and served with the 14th Company, 3rd Battalion of the Otago Regiment of the New Zealand Expeditionary Force.