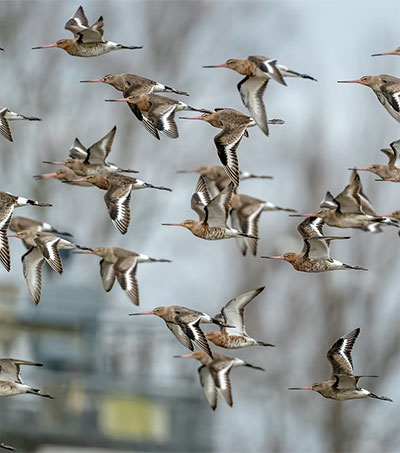 Tens of thousands of bar-tailed godwits are taking advantage of favourable winds in September and October for their annual migration from the mud flats and muskeg of southern Alaska, south across the vast expanse of the Pacific Ocean, to the beaches of New Zealand and eastern Australia, Jim Robbins writes for The New York Times.

“The more I learn, the more amazing I find them,” said Theunis Piersma, a professor of global flyway ecology at the University of Groningen in the Netherlands and an expert in the endurance physiology of migratory birds. “They are a total evolutionary success.”

The godwit’s epic flight – the longest nonstop migration of a land bird in the world – lasts from eight to 10 days and nights through pounding rain, high winds and other perils. It is so extreme, and so far beyond what researchers knew about long-distance bird migration, that it has required new investigations, Robbins reports.