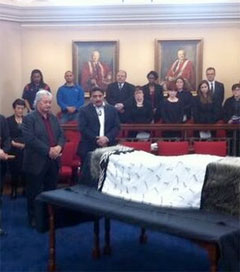 A tattooed preserved Maori head, or toi moko, and skeletal remains, koiwi tangata, discovered in the anatomy department at the University of Birmingham, are being returned to New Zealand.

University staff said the ancestral items had not been used or displayed and their presence at the university was a mystery.

Dr June Jones, from the College of Medical and Dental Sciences, said: “We have no records about how these items came to be in storage at the university, but when they were uncovered we knew we had to give them back.

“They belong back with their own people, to be treated with the dignity and respect they deserve.

“It’s most likely from Victorian times when we had a lot of wealthy people in Birmingham. Collecting heads was an activity, a hobby, for some men.”

The handover was arranged as part of Te Papa’s repatriation programme, which has managed the return of more than 100 items since 2003.

It said more than 400 items were believed to still be in the UK, based on records kept by museums and other sources.