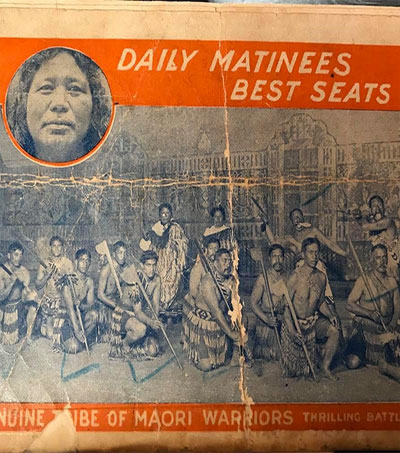 Rēnata West Searches US for Spirit of His Ancestors

When Rēnata West moved from New Zealand to the US in 2016, he discovered something unexpected: the path of his great grandmother, who had travelled the same route more than 100 years ago. West writes about his experience for AFAR magazine.

Los Angeles-based West is the founder of Pacific Storytelling, which enables “the sharing of stories and culture from an indigenous viewpoint.”

Upon hearing West was visiting New York, his mother told him to find the Hippodrome.

“What had she discovered in her files?” West writes. “A road map that allowed me to find a personal connection to America that I never knew existed.

“‘Daily Matinees, best seats $1.00,’ read the 1909 advertisement for something called the New York Hippodrome, accompanied by a photo of a face I was very familiar with, my great grandmother. Kirimatao was her name, and she was a woman of high-ranking Māori heritage. I recognised her face from the various old photographs we had around the family homestead and from seeing copies of famous paintings made of her by early artists Gottfried Lindauer and C. F. Goldie.

“The programme went on to describe that, ‘at an expense beyond anything ever before undertaken by a theatrical management,’ a contingent of 40 Māori performers – 40 of my relatives, who had left the shores of New Zealand for the first time – would act in a dramatic production called ‘Inside the Earth’ where the Māori tribe would rescue a damsel in distress and save the day.

“I needed to learn more.”