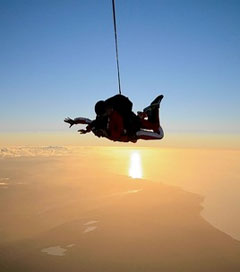 “With a 19,500-foot parachute jump over New Zealand’s scenic South Island … one of the highest commercial sky-dives in the world that doesn’t require customised planes and breathing equipment,” The Wall Street Journal’s Chris Allbritton vanquishes his fear of heights. “‘The impact on your life that the act you are now contemplating cannot be overstated,’ one brochure gravely asserted. ‘You must choose.’ And choose I did – an outfitter called Skydive Franz. At the time, the company advertised its 18,000-foot tandem jump as the highest in New Zealand. But the owner, James Meldrum, offered to let me try his upcoming offering: 19,500 feet, roughly 1000 feet short of the summit of Mount McKinley, North America’s tallest peak. In a bid to seize the high ground against the competition, Meldrum plans to introduce the option on 1 June.”