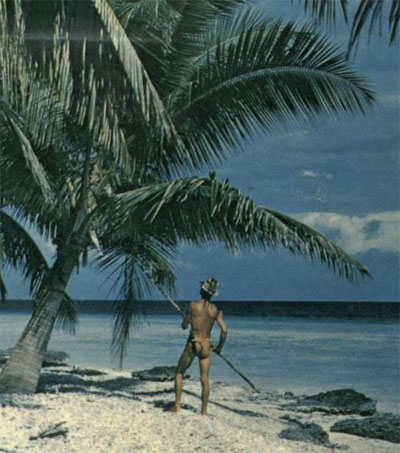 “The phrase “sole survivor” evokes scenes of violent disaster — a plane crash; an explosion in a mine; the eruption of a volcano whose lava destroys a city and all its inhabitants but one,” online guidebook Atlas Obscura writes. “But not all sole survivors have been through a hell unleashed on them by fates beyond their control. Take the story of New Zealander Tom Neale.

“Neale was dumped by boat on a tiny atoll in the Pacific, where he lived alone for 16 years. [He] rode out violent storms in a rickety shack, ate a diet heavy on fish and coconuts, and wore nothing but a loincloth. It is the remarkable tale of a shipwrecked survivor, but for one detail: Neale did not land on the atoll by accident or during a terrible storm. He travelled there willingly and enthusiastically, determined to live a simple, solitary existence on an island he could call his own.

“Formerly a shopkeeper, Neale became fixated on the tiny Cook Island atoll of Suwarrow (also known as Suvorov) in 1943, when author and traveller Robert Frisbie spoke of it to him after visiting. In his memoir, An Island to Oneself, Neale wrote of their conversation:

“‘That afternoon Frisbee entranced me, and I can see him now on the veranda, the rum bottle on the big table between us, leaning forward with that blazing characteristic earnestness, saying to me, “Tom Neale, Suvorov is the most beautiful place on earth, and no man has really lived until he has lived there.”

“A three-year break in Rarotonga allowed him to pen An Island to Oneself before returning for his final, decade-long stay on Suwarrow. In 1977, stricken with stomach cancer, he was transported back to Rarotonga, where he died at the age of 75.

“Despite his long stretches of solitary living, Neale claimed he never felt lonely. The few times he wished someone were with him, he wrote in his memoir, were ‘not because I wanted company but just because all this beauty seemed too perfect to keep to myself.’”

Tags: An Island to Oneself  Atlas Obscura  Suwarrow  Tom Neale