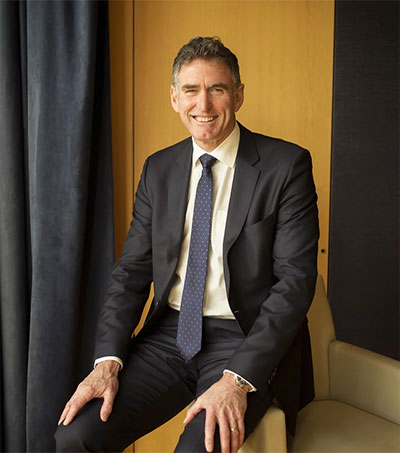 While the Royal Bank of Scotland share price did sink to levels reminiscent of the 2008 crisis, when the bank ran out of cash and only survived because of a £45bn taxpayer bailout, New Zealand-born chief executive Ross McEwan said the immediate impact in the first few days after the Brexit vote was different. “We had deposits coming to us because people realised we were a strong bank,” he told the Guardian.

The sports fanatic, who enthuses about 5.30am bike rides on Saturdays in Richmond Park in London, took what is arguably the UK’s highest profile job in banking after Stephen Hester, who had lured him from Australia a year earlier to run high street operations, was forced out after a series of run-ins with politicians.

Sitting in an impersonal meeting room in the bank’s London base, McEwan rattled off how he had cut costs, sold off riskier assets, and accelerated the pullback to 13 countries from the 54 countries where Fred Goodwin had planted flags. Halfway through his five-year plan, McEwan has refocused the bank on the UK and Ireland, where it owns Ulster Bank. Together these markets generate 90 per cent of revenue compared with 50 per cent pre-crisis.

When he arrived at RBS, he admitted being “quite surprised by how bad this industry is” and set about making changes. He is ending teaser rates, zero per cent balance transfers on cards and two years ago started helping mortgage customers prepare for a rate rise. Even against a backdrop where rates are now falling, those fixed rates on to which customers have been moved will “have stood them in very good stead”, said McEwan.

Symbolic changes have been made too. The bank’s boardroom in London – known as the “war room” in Fred Goodwin’s day – has been renamed after Andrew Berkeley Drummond, part of the family that founded Drummonds Bank, which RBS still owns. As McEwan posed for pictures in the blue-curtained room, he paused at a plaque spelling out Drummond’s rules: “The first rule never to be departed from is to make the welfare of the customers the first object.”