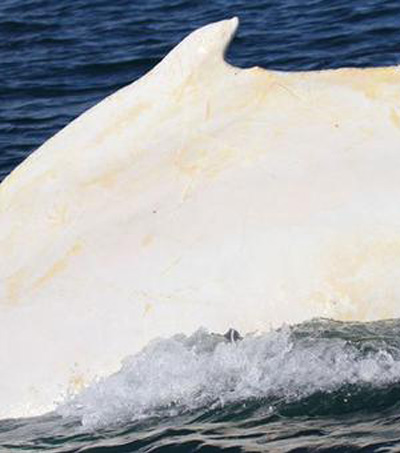 A rare white humpback, usually spotted up the eastern Australian coastline, has been seen swimming with a normally dark-coloured humpback in New Zealand’s Cook Strait.

“White humpbacks are extremely rare. Only four have been reported in the world,” said Nadine Bott, New Zealand Department of Conservation.

Because of his distinctively shaped dorsal fin and prominent spine, scientists are almost certain that the rare white whale is 24 year-old Migaloo.

“The whale, whose name is Aboriginal for ‘white fella’, was first seen off eastern Australia in 1991 and has been spotted migrating from Antarctica to the Great Barrier Reef almost every year since.”

Migaloo is known for escorting females and singing to them.

“There has been speculation he may have fathered other white humpbacks, and if he is able to successfully reproduce, there is a high probability the calf will be white too,” said Peter Harrison, a Southern Cross University’s professor.

Behrouz Boochani, 37, a Kurdish-Iranian refugee who wrote the award-winning book, No Friend But the Mountains on his mobile phone while held in one of Australia’s notorious Pacific detention camps, has…