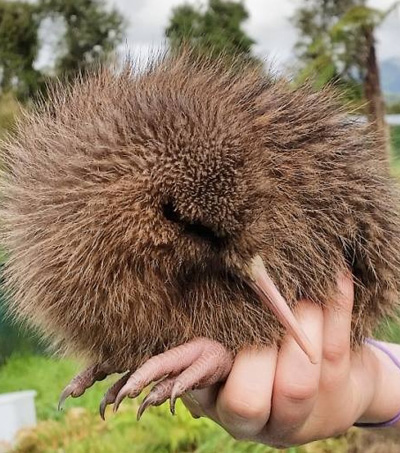 A rare baby kiwi has been born at the West Coast Wildlife Centre in Franz Josef on New Zealand’s South Island. The baby kiwi named Nutter, described as “90 per cent fluff and 10 per cent pointy” has been relocated to his new home to the Marlborough Sounds with 56 other kiwi chicks.

Nutter was named after New Zealand ultra marathon runner, Mal Law, who was participating in a fundraiser at the time of the bird’s birth in February.

He is “known as Chief Nutter by his team… because laughingly people who run up and down mountains were “nutty”, Ms Vervoorn told Daily Mail.

The rowi kiwi bird is one of the rarest species of its kind.

“There’s only 400 of them in the world and a majority live close to us here in Franz Josef in the Okarito forest”, said Cornelia Vervoorn, Department of Conservation’s partnerships ranger.

Now “’Nutter and his mates live on the Marlborough Sounds… which is predator-free. They’ll live there until next year some time when they are big enough to [avoid] stoats.”

If rangers had not gone out to rescue Nutter’s egg, he would have had a 95 per cent chance of being killed by a stoat after he was born in the wild.