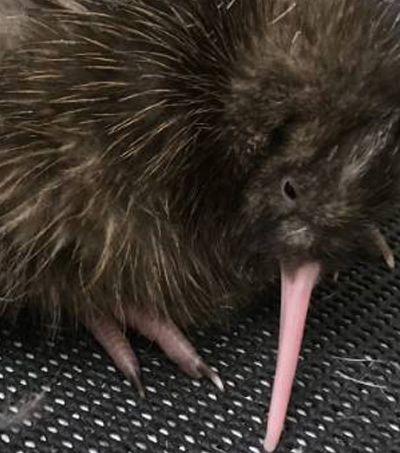 How to Raise the Rarest Kiwi

“When I first see the kiwi chick, I briefly wonder if I’m actually looking at a real animal. It’s a grapefruit-sized sphere of fluff with an adorably short version of an adult’s long beak,” and when it sits still it “looks indistinguishable from some of the plush toys that fill New Zealand’s gift shops,” writes Ed Yong in an article for The Atlantic. Yong visited the West Coast Wildlife Center in Franz Josef in New Zealand.

The kiwi chick named Kami hatched just six days ago and will soon have company. “In the room next door, 22 more kiwi eggs are incubating in an artificial chamber.” It’s all part of Operation Nest Egg – “a 23-year project to save New Zealand’s most iconic animal, rangers and volunteers capture the eggs of wild kiwis, incubate them in captivity, and rear the chicks till they’re large enough to fend for themselves.”

For millions of years, kiwis had little to fend against as the only land mammals in New Zealand were bats. According to the article around 70 million kiwis used to trundle through New Zealand’s undergrowth. But when humans introduced dogs, ferrets, cats, rats, and stoats the kiwi population decreased drastically to “the measly modern tally of just 68,000 birds”.

“Most people speak of kiwis as if they are one species, but they are actually five. Kami belongs to the rarest of the quintet—the rowi, which was only recognized as a distinct species in 2003,” and “there are only 450 of them left in the wild,” writes Yong.

“In the wild, half of rowi eggs fail to hatch. Of those that do, around 90 percent lose their lives to the jaws of predators before they reach adulthood.”

“After seeing these depressing statistics in the 1990s, Rogan Colbourne and Hugh Robertson from the Department of Conservation realized that the best way to save the birds was to raise their chicks in sanctuaries, releasing them only when they had outgrown the appetites of stoats, at least. And so, Operation Nest Egg began.”

As part of the project, rangers find wild rowi and collect their eggs, which are placed in a cool box and sent to a captive rearing facility. “There, volunteers “candle” the eggs—shining a light on it to check for cracks and to inspect the embryo within. Once the egg is inspected, cleaned, and weighed, it is placed in an incubator that slowly turns it, mimicking the actions of a incubating male,” as reported in the article. After 90 days or so, it’s time for the egg to hatch.

The Operation Nest Egg team even socializes the kiwi chicks by taking them to crèche islands—predator-free offshore sites, where a young kiwi can learn how to kiwi.

“All the young birds socialize, get into scraps, and learn how to run away,” said Colbourne. “They learn that if they see another kiwi, they shouldn’t run up to it. And if they get chased, they’ll be fit enough to run.” After some time, they’re taken back to Okarito and released.

“Without all of this intensive work, only two new rowi would make it to adulthood in a single breeding season. Now, around 50 do so.”