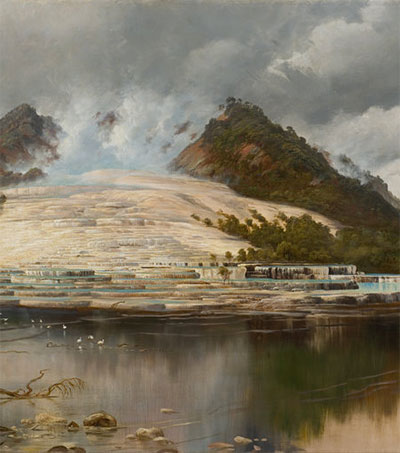 Roughly the size of a city block and up to eight stories high, the Pink and White Terraces were one of the top tourist attractions in New Zealand during the 19th century, Atlas Obscura reports.

Visitors came from around the world to admire the dramatic, colorful, cascading formations – formed by the mineral-rich waters of a geothermal spring – on the shores of Lake Rotomahana, at the foot of Mount Tarawera.

Willy Bennett saw the terraces as a child and described them for a New Zealand radio programme in 1954: “The White Terraces were not actually white, but their silica coating, tinged here and there with the palest of pinks, gave you the overall impression of old ivory tinted a faint yellow. Likewise, the Pink Terraces, which ranged from a rich salmon pink to a soft rose, were themselves, in places, almost as pale as the White.”

The Tarawera eruption of June 1886 lasted about five hours, buried the region in ash, and dramatically reshaped the landscape. A 16.8km fissure cracked open along the mountain’s lava domes. The original Lake Rotomahana at the base of the mountain was blown sky-high. The Pink and White Terraces were thought lost forever.

The fate of the terraces – blown to bits or buried or something else – is a mystery, well and truly lost. The only survey of the terraces before the eruption, completed in 1859, wasn’t rediscovered until 2010, when a research librarian found it in Christian Gottlieb Ferdinand von Hochstetter’s diary in a family archive in Switzerland. Even with that, the precise location of the terraces is unknown, which has meant that no one could determine whether they survived the eruption. Finally, 131 years after the Tarawera eruption, there’s new hope the terraces can be rediscovered, and perhaps even resurrected, thanks to that 1859 diary.

Independent researcher Rex Bunn is on the case.