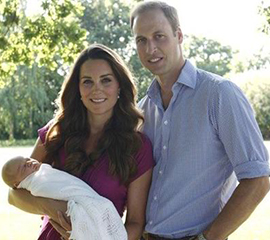 Prince George will take part in his debut public engagement next month when he accompanies the Duke and Duchess of Cambridge to New Zealand, Kensington Palace has announced.

The Prince, who will be almost nine months old by then, will spend nine days in the country as part of a three week tour of New Zealand and Australia with his parents William and Kate. The royal family will arrive in Wellington on April 7, when the local public will get their first glimpse of the royal baby as he is carried off the plane.

Though Prince William was last in New Zealand shortly after the Christchurch earthquakes in 2011, Kate Middleton has never visited New Zealand and “has wanted to visit for as long as she can remember”, their Royal spokesman said. The couple are “tremendously excited and looking forward to it immensely,” he added. “There’s no hiding their enthusiasm for this visit.”

The family’s packed schedule comprises 25 engagements in New Zealand and 23 in Australia, though they will have three days of down time to spend relaxing with Prince George. The family will be based at the Government House in Wellington, where Prince William famously toddled around on the lawn at around the same age with parents Charles and Diana.

The royal family will be given a Powhiri upon arrival, with other activities including the couple taking part in a yacht race in Auckland harbour and a 50mph white water ride down the Shotover River in Queenstown.

Shotover Jet said it would be “thrilled and delighted” to take the royal couple for a spin on their visit to Queenstown.

“The royal couple are known for their love of the outdoors and sports, so we think they’ll really enjoy the chance to experience a world-leading Queenstown adventure tourism operation,” says Ngai Tahu Tourism Southern Regional Manager David Kennedy.

With the Duke and Duchess of Cambridge visiting four South Island and four North Island centres, Monarchy New Zealand Chairman Sean Palmer said the length of the trip and the coverage of the country were “fantastic”.

“The more of the country they can see, the more they can engage with people,” he said.

“From an economic perspective, this is really good for New Zealand on the world stage. When they see the sights, when they engage with Kiwi activities, culture and industry, the world media follows them on that.

“It will shine a spotlight on that in a way we could never advertise or sell.”