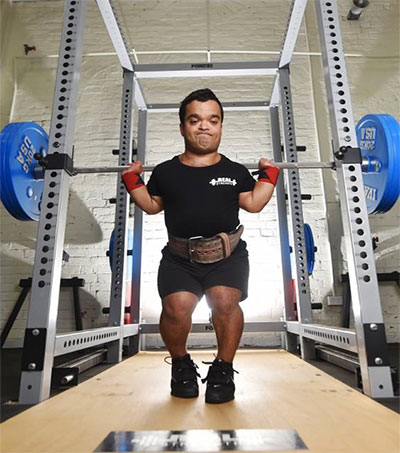 He might be only 122cm tall, but New Zealand-born Kevin Gray, 32, is a tower of strength and has the powerlifting world in a spin with his amazing feats of strength.

Fresh from establishing a new 59kg-class Australian squat record last December, Gray, who tips the scales at only 55kg, has a world record in his sights.

The pocket dynamo has been lifting weights competitively for little more than six months, and is continuing to raise the bar to levels previously considered unattainable.

His unprecedented 222.5kg squat at the Christmas Strength Shootout in Melbourne bettered the previous Australian record by a remarkable 34.5kg.

The lift was just 5kg shy of a world record, which Gray hopes to break at an international competition in Sydney in April.

Gray, who moved to Bendigo three years ago to be with his partner Ashleigh, labelled the prospect of becoming a world record holder as surreal.

Even his greatest fan, Dean Mawby, who happens to double as his coach, sometimes has to pinch himself as a reminder to how far his mate has come.

“To be talking about world records, even within five years of training is unheard of,” Mawby said.

“We’ve seen some lifters who have been in the game a while mention some pretty crazy figures, I think it’s possible he can squat 600 pounds one day – 272 kilos – over five times his body weight.

“And I don’t know if there’s anyone in the world who can do that.”