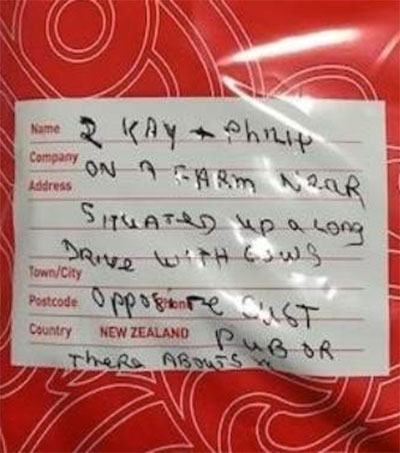 Post Makes Its Way to the Farm up the Long Drive

A parcel sent to a couple in New Zealand addressed only with “a farm, situated up a long driveway with cows, opposite a pub or thereabouts” has reached its rightful owners, via the Cust post centre, located between Oxford and Rangiora.

Manager of the Cust service centre (the postal operation is attached), Tammie McGrath, said it was custom to return mail that was not properly addressed to the sender. But she decided to attempt to find the cow-owning recipients of the parcel, posting an image of the package to Facebook. The only other clue on the parcel was that it was for ‘Kay and Philip’.

“I could tell it had been written by an older person and I just thought, well, I’ll hang onto it for a couple of days before I send it back and see if I can find who it belongs to,” McGrath told Guardian Australia.

“A couple of hours after I posted it on Facebook, a man came in and said, ‘I think we own this parcel’. He gave me his details and said his name was Philip, and that while he didn’t live across from a pub, he lived down the road from one. He also showed me a card with a picture of his property on it, which showed a field with cows on it. He isn’t actually on Facebook, but people who know him who are on Facebook showed the post to him.”

More than 2300 people shared the post. It turned out the lady who sent the parcel was 70-year-old woman Irene Meekings, who had visited Kay and Philip Forrester’s home on a farm in Fernside – a small settlement 12km east of Cust – a couple of times with her daughter-in-law for dinner. Though almost blind, Meekings likes to sew, and the package contained thank-you gifts of a handmade tea towel and apron.

“This little old lady went to all the trouble to send this package, and I am glad we were able to help her to get it to the right place,” McGrath said.