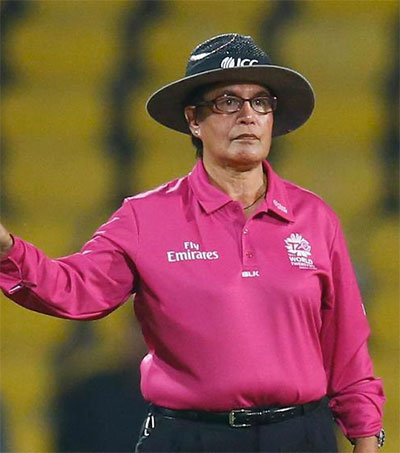 New Zealand’s Kathy Cross, 60, who was the first woman to be named on the International Cricket Council (ICC) Umpire’s Panel, will retire from international umpiring after the Twenty20 International series between New Zealand and Windies Women.

She has also worked at men’s senior events, including the ICC World Cricket League Championship Divisions 3 and 5.

“I’d just like to say thank you to everyone who supported me throughout my career, and to wish all the other umpires the very best,” Cross said. “New Zealand is doing well with women umpires coming through the ranks and I am sure they will be a success whichever way they choose to go and whichever opportunities they are given.”

Cross was a late entrant to cricket. She only began playing at 30, and turned to umpiring a decade later, in 1998-99. In 2014, she was included in what was then known as the ICC Associate and Affiliate panel of umpires.

“I didn’t have any problems with being an umpire itself, but gender-wise, it was very lonely. Perception is paramount out there as far as players are concerned, and a lot of male players have not been umpired by a female umpire,” she said in an interview during the ICC Women’s World Cup Qualifier in 2017.

“People have seen that I’m a bit of a pioneer for women in cricket. I’m a little humbled by that really, because I’m only doing what I love doing.”

Paying tribute, New Zealand GM Operations Catherine Campbell said, “One of the main reasons we now have a healthy stock of young women’s umpires coming through the ranks is because Kathy has played a leading role in demonstrating the possibilities.”