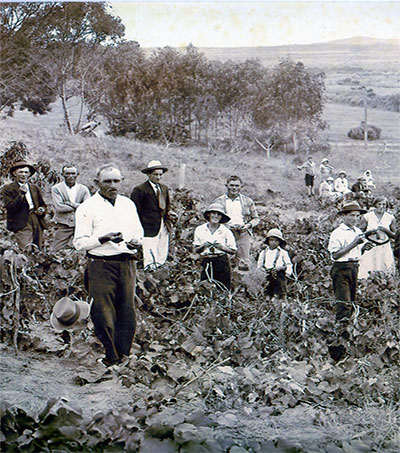 Historian and author Kaye Dragicevich has been extensively researching the Far North of New Zealand, the area where a large number of pioneering families came from Croatia in search of a better life over 100 years ago, online magazine Croatia Week reports.

Her book, titled Pioneer Dalmatian Settlers of the Far North, took four years to complete and features 200 interesting stories of families who arrived in New Zealand’s gumfield area in the far north from Croatia. It also includes 900 historical photographs.

Croatia Week features a story from the book about the Srhoj family, of which three cousins (together with their friend Kuzma Matijevich),  left their small village of Bogomolje in 1897 in search of a better life in New Zealand.

Their first impression on arrival was intriguing. No passports were required and there was no customs officer to deal with. Records show, that they made their way north by rail to Helensville, where they took up gum digging, most likely towards the South Kaipara Heads and north of Helensville. After some time working together, Jakov returned to his homeland. In 1901, Mate, Toma and Kuzma pooled their resources and bought a block of land, the site that Kaipara College is now on. They planted fruit trees, grapes and established a vineyard.

The Srhoj family were one of the first of the northern Dalmatian/Croatian settlers who seized the opportunity to positively make the transition into dairy farming. It was through the joint efforts of the family working together; burning off the scrub, filling in the gum holes, ploughing the land with horses, sowing grass seed and fencing, to establish a dairy farming enterprise. Many others in the Far North took up dairy farming and they too succeeded as farmers.

With the help of his family, Mate made a valuable contribution towards the development of the Far North in its early stages and difficult beginnings of dairy farming. His receptive attitude to modern ideas in farm development and willingness to take financial responsibility, combined with prudence, was remarkable. A tradition of worthy service built by him, will long be remembered in Northland. In 1977, the 80th anniversary of Mate’s arrival was celebrated at Waiharara. Two hundred and ten people came from near and far, a supreme tribute to Mate.

In 1997, the Srhoj’s extended family gathered once more at Waiharara to honour the 100th anniversary of Mate’s arrival in New Zealand.