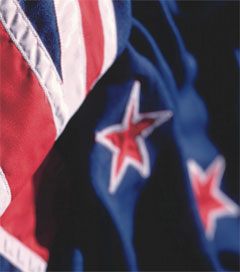 Our Islands Formally and Bilingually Named

15 October 2013 – New Zealand has formally adopted names in English and Maori for the North Island and the South Island; the English already in use but which had not been officially designated.

In Maori, the North Island will be called Te Ika-a-Maui and Te Waipounamu, which mean “the fish of Maui” and the South Island, “the waters of greenstone”.

The move meant people could choose which name to use, a minister said.

“My decision to assign alternative names means people can use whichever they prefer and they will not be forced to use both the English and Maori names together,” Land Information Minister Maurice Williamson said.

Williamson said the Maori names had “historic and cultural significance, and appeared on early maps and charts, including government maps, until the 1950s”.

The English names had been used in official publications for years but had not, to date, had any formal standing, he added.