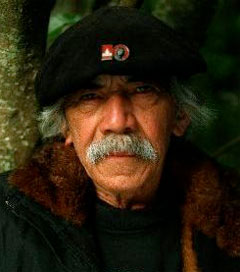 One of Our Greats Farewelled

“There are few things I can say about my work that are better than saying nothing,” Ralph Hotere once said. With his death on 24 February, aged 81, art commentators and New Zealanders from all walks of life have had something to say about the man and his work. “He was our greatest living contemporary artist. I don’t think there’s much doubt about that,” Dunedin arts curator Peter Entwisle said. “Ralph Hotere. A truly great artist one of our greatest and, like Colin McCahon, a bridge across two powerful rivers, haere ra,” Auckland art historian Hamish Keith said. “And it should be said of Ralph Hotere that he was a great warrior artist and he fought with his art for great causes. When a great person dies we are left with the changes they made to our world – time to reflect on that.” Hotere was born Hone Papita Raukura Hotere in 1931, in Mitimiti, just north of Hokianga Harbour. Many of Hotere’s works referenced the dark side of life and his political beliefs. His Sangro series was a memorial to his brother, Private Jack Hotere, who was killed in action by the Sangro River in Italy on 21 December 1943. Artist Shane Cotton said: “Without doubt one of our greatest artists, whose legacy will continue to influence many more generations. E te Rangatira, haere atu ki te po nui … moe mai i te rangimarie.” Hotere received New Zealand’s highest honour – the membership of the Order of New Zealand, which is limited to 20 living members – in the 2012 New Year Honours.