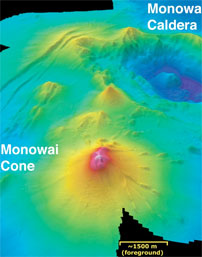 Scientists have discovered a submarine volcano in New Zealand waters, 1000km northeast of the North Island, that has undergone the fastest episode of collapse and growth ever recorded in a volcano. The Monowai Cone is a giant submarine volcano that underwent a mighty geological upheaval during five days in mid-2011. During this time, the volcano added about 8.5 million cubic metres of lava and debris to its summit. Aside from providing insights into the dynamics of seafloor volcanism, the observations also have implications for geohazards such as tsunamis, said co-author Cornel de Ronde of GNS Science. “Submarine landslides and submarine volcanism can set off a tsunami that can travel across the ocean,” de Ronde said.