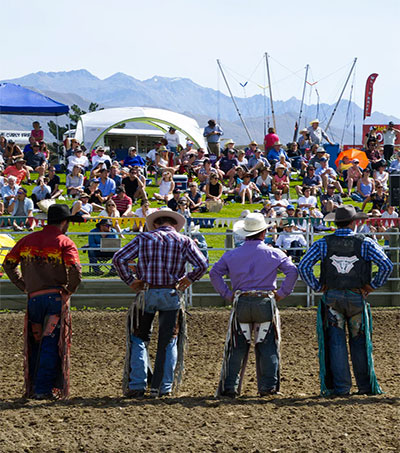 On the Rodeo Trail in New Zealand

Animal activists are calling for rodeos to be banned in New Zealand, but cowboys say bull riding is their calling. Eleanor Ainge Roy and Paul Roy report on the controversial sport in a photo essay for the Guardian.

New Zealand’s rodeo is a small circuit, with just 35 events a year and 500 competitors. During the hot summer season though, events can draw crowds in their thousands, as they are often staged around the holiday period.

The Society for the Prevention of Cruelty to Animals (SPCA) and Save Animals From Exploitation (SAFE) have issued repeated and strident calls to ban the sport, calling the rural events “a terrifying and cruel experience for animals”, and saying New Zealand should follow the lead of the UK in outlawing them.

But the new Labour government rejected a ban in March, as has the New Zealand Veterinary Association (NZVA) and the thousands of passionate rodeo participants and spectators around the country, who almost exclusively live and work in rural areas.

Circling the edge of the arena is a local vet, on duty all weekend as required by the animal welfare act. She conducts health checks on every animal before and after they enter the arena, monitors their food, water and stress levels, and is on hand to attend accidents or injuries, of which there are none at the national finals.

“It’s a hell of a lot better than it was 10 years ago; the intense scrutiny has made everyone sharpen up,” says the vet.

Ernie Rika, 25, has been riding bulls for a decade. He works as a horse trainer for Chad Ormsby, and introduced his boss to rodeo. Both of them hope to turn their passion into a profession by becoming cowboys on the professional rodeo circuit in the US.

Rika would like to see rodeos moved closer to towns to encourage more city dwellers to attend.

“A lot of them [protestors] haven’t actually been to a show, or spent a lot of time around it,” Rika says.

“I don’t know, it would be good if they came and looked for themselves, and had a bit of a talk to us. Rodeo has been around a long time, and I hope it continues even longer.”