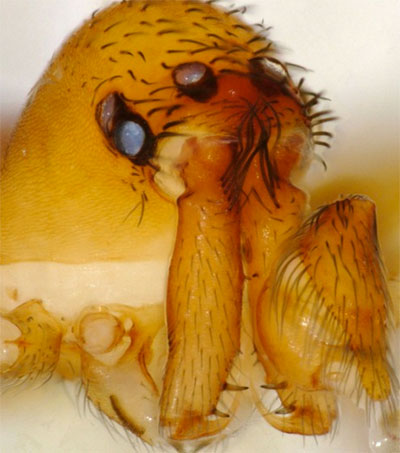 NZ Spider Could Have the Fastest Jaws in the World

New research undertaken by scientists at the Smithsonian Institution in the United States has highlighted a species of New Zealand spider that could have the fastest jaws in the world, with strikes so fast that high-speed cameras struggle to capture it.

Researchers studied trap-jaw spiders, which live in New Zealand and South America, and found the local species struck prey with lightning speed. But don’t worry about spotting one across the ditch, New Zealand members of the species – Mecysmaucheniidae – are tiny, with some less than a millimetre long.

New Zealand is home to around 2000 species of spider, with 95 per cent endemic and around 700 species as yet undescribed by the scientific community.

Smithsonian Institution’s National Museum of Natural History researcher Hannah Wood said there was still so much to discover about arachnids.

“The high-speed predatory attacks of these spiders were previously unknown. Many of the species I have been working with are also unknown to the scientific community,” Wood said.

“I can’t imagine why these spiders would have evolved such an elaborate prey capture mechanism,” Vink said. “They don’t seem to have specialised in any particular prey and have been reported to feed on a range of insects and spiders.”

The research is published in the journal Current Biology.