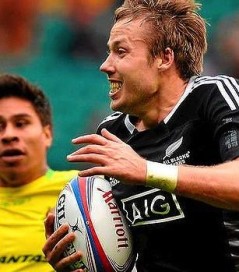 New Zealand crowned their Rugby World Sevens title for 2012/13 with victory in the final tournament at London. The victory came with a 47-12 ‘thrashing’ of Australia, says The Age. Coach Gordon Tietjens’ team had already ensured they would win an 11th series at Glasgow the previous week but they finished the season on a high with their win at Twickenham. The only team with a perfect three-from-three pool plays record; New Zealand was just as dominant in a 52-7 quarterfinal defeat of Argentina. Veteran coach Tietjens attributed victory to the attitude of his players right until the end of a long campaign. ‘We work really hard and you get a lot when you work hard.  We have got a great team here and a lot of young players. Tim Mikkelson was simply outstanding,’ Tietjens said. New Zealand won two of the nine tournaments, including the third leg at Port Elizabeth in December. But, ‘consistency was a hallmark’, New Zealand being the only team ‘to reach the Cup quarter-finals of every tournament,’ The Age said. Tietjens’ attention now turns to the sevens World Cup in Moscow in June 2013, where New Zealand will chase their second world crown. Second-placed South Africa finished 41 points behind New Zealand in the standings, with Fiji third. Leading final standings: New Zealand 173, South Africa 132, Fiji 121, Samoa 104, Kenya 99, England 92, Wales 91, Australia 89. New Zealand has now won 11 of the 14 Rugby World Sevens Series events since the competition began in 2000.