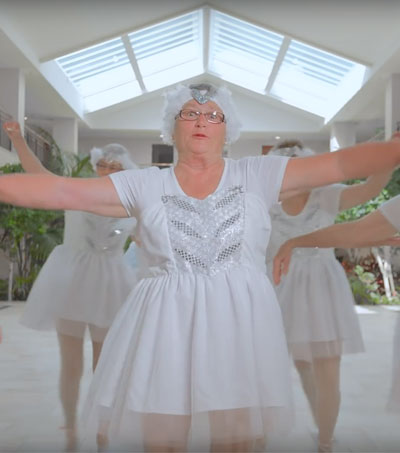 A group of 50 New Zealand retirees have “done their own take on Taylor Swift’s Shake It Off video, adding only the occasional local, and age-appropriate, touches such as frenetic cupcake dusting,” reports the Guardian.

Staff from the Julia Wallace retirement village in Palmerston North and residents’ grandchildren helped to produce the video, which has been viewed 159,000 times.

“Just because we’re in a retirement village, doesn’t mean we can’t have fun. We still have life and energy, and sometimes I feel I do more now than when I was younger, because I have more time,” said 72-year-old Margaret Gregory, who was cast as Swift in the video.

The combined aged of the participating residents was 4,000 – the average age was 82.

The Kiwi retirees mimicked the original video almost shot for shot, but also included some local touches such as asparagus rolls being vigorously constructed and cupcake dusting.