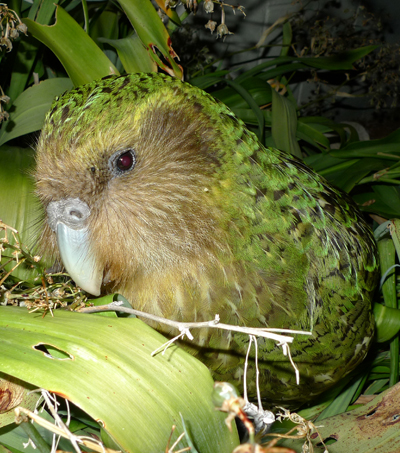 The critically endangered kakapo – one of the world’s rarest birds – “saw its numbers boom by 28%” with 34 new chicks this year. That brings its population up to 157, as reported in an article on BCC.com.

In the 1970s kakapo numbers were down to 18 – all male. “That changed when some females were discovered in 1977, and they’ve since benefited from a dedicated recovery programme,” according to the article.

The flightless parrots breed every two to four years and are only found in New Zealand, where they live on three predator-free islands.

“We have a lot of ongoing research projects: a supplementary food trial, research into a disease that’s a big problem, a study into vitamin D, and a project to sequence the genomes of all living kakapo – the first time that’s been done for any species,” Dr Andrew Digby, DOC’s Science Advisor for Kakapo and Takahe told the NZ Herald.

The project to sequence every living kakapo’s genome was started earlier this year, “in order to manage their breeding and help improve genetic diversity among the population.”