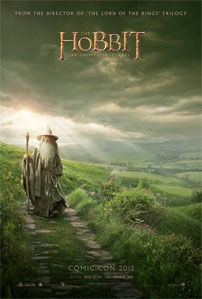 Now to the Cutting Room

Two of Hollywood’s most anticipated — and most expensive — forthcoming movies have wrapped production in New Zealand. Shot together, a pair of films based on J.R.R. Tolkien’s classic fantasy book The Hobbit have completed principal photography following a 266-day shoot in New Zealand, director Peter Jackson announced on his Facebook page. The Hobbit: An Unexpected Journey, the first of the two movies, hits theaters on 14 December of this year, followed by The Hobbit: There and Back Again on 13 December 2013. “Next stop, the cutting room,” Jackson said. The Hobbit is expected to be the centrepiece of Warner Bros.’ presentation at the Comic-Con International convention in San Diego on 14 July.