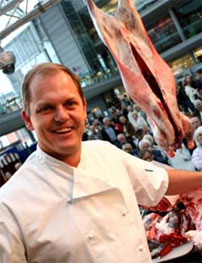 “New Zealand chef Chris Coubrough’s food empire has been growing faster than an asparagus stalk in May,” Norwich Evening News Sarah Brealey writes in a review of Coubrough’s Norfolk gastropub the King’s Head in Letheringsett, which was last year crowned the Good Pub Guide’s dining pub of the year. “Starters include pork belly with black pudding, home-cured beetroot gravadlax with sultana bread, or a caramelised onion and goats’ cheese tartlet … Sunday lunches are very popular at the King’s Head. The wine list is quite extensive … [and] even includes a Spanish white popular at the triple-Michelin-starred El Bulli.” Coubrough, was chef presenter of the Coastal Kitchen series for ITV Anglia and Discovery UK. He has also filmed Eating for Britain for Channel 4 and Market Kitchen (UKTV). Coubrough owns The Flying Kiwi Inns, a group of inns and hotels in Norfolk.