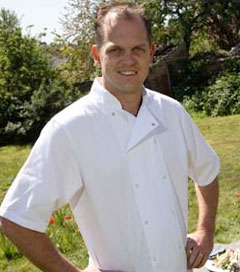 New Zealand-born north Norfolk-based owner of the Flying Kiwi Inns chain of UK boutique hotels Chris Coubrough is also chairman of this year’s North Norfolk Food Festival, to be held at Holkham on 31 August and 1 September.

For Coubrough the reason north Norfolk is home to such tasty produce is a simple one.

“We’ve got the sea on one side and arable land on the other – it’s the best of both worlds,” Coubrough says. “North Norfolk is home to such great produce, from Teddy Maufe’s malting barley to Frary’s crabs.”

Coubrough is a Master Chef and hosted ITV’s Coastal Kitchen, where he travelled around the coastal areas of Norfolk, Suffolk and Essex in search of food producers and locally-grown ingredients. He has also appeared on Eating for Britain and Market Kitchen.

Flying Kiwi Inns is a hotel pub company consisting of five award-winning hotels and inns situated on the north Norfolk coast and inland.