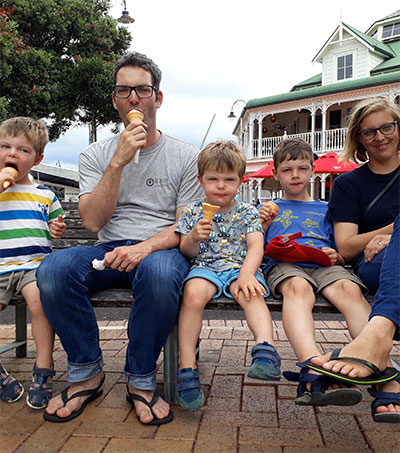 No Worries for Swiss Family in New Zealand

Even though she’d never been here before, Eva Hefti took the chance and moved with her family to New Zealand. Her husband had found a job in Northland which, due to the shorter working hours, allows him to spend more time with his family. It’s the pleasant climate, the 39-year-old from Switzerland’s capital city, Bern loves most about New Zealand.

“We live on the North Island in the small town of Whangarei,” Hefti explains.

“We really like the vastness and the empty beautiful beaches [of New Zealand] as well as the pleasant climate. The mentality of the people is generally more relaxed than in Switzerland. ‘No worries’ is a typical Kiwi saying. The low population density, the lack of public transport and the remoteness are probably the biggest differences to Switzerland.

“[The best thing about living here is] the fact that I don’t need winter clothes; that the sun shines most of the time; that we can go to the sea whenever we feel like it; and that our children are able to learn a new culture and another language.”