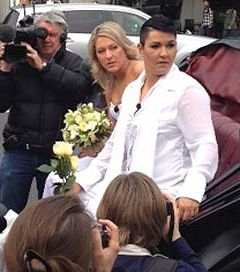 Just hours after same-sex marriage laws came into force, New Zealand’s first gay marriages began taking place across the country. 31 couples plan on tying the knot today, but the number is likely to be much higher as this number only reflects the main centres.

The department of Births, Deaths and Marriages says that almost 1000 marriage forms were downloaded from its website in the past week, while new forms uploaded to the site ahead of today’s history making day were at three times the normal level. More than 150 of those are for overseas couples planning to wed in New Zealand.

Tash Vitali, 37, and Mel Ray, 29, (pictured) were one of the first same-sex couples to wed, with the pairs’ colourful guests arriving at Ponsonby’s Unitarian Church at 8:15 this morning. The couple were not legally allowed to say their vows until their marriage licence, which only became available from the Registry Office at 8.30am, was in the church and signed by all parties. It arrived at 8.38am.

Reverend Dr Matt Tittle, who conducted the ceremony, said it was an honour. “It’s history in the making and hopefully it will help other countries to do the same and help New Zealanders to realise that everyone has worth and dignity no matter who they love.”

Labour MP Louisa Wall, who was responsible for the bill that legalised same-sex marriage, read the poem Touched By An Angel by Maya Angelou while Ms Ray and Ms Vitali waited.

New Zealand became the first country in the Asia-Pacific and the only the 14th country in the world to legalise same-sex marriage in April.  The significance of the law change is being felt within the region, with about 1,000 same-sex Australian couples indicating that they plan to travel to New Zealand to marry, according to the Australian Marriage Equality lobby group.

The first same-sex Australian couple expected to do so are Paul McCarthy and Trent Kandler, who won a Tourism New Zealand competition to marry in New Zealand. Their wedding will not be legally recognised in their home country, but Mr McCarthy told AFP news agency the move was “both historically significant, and an important step in our personal lives”.