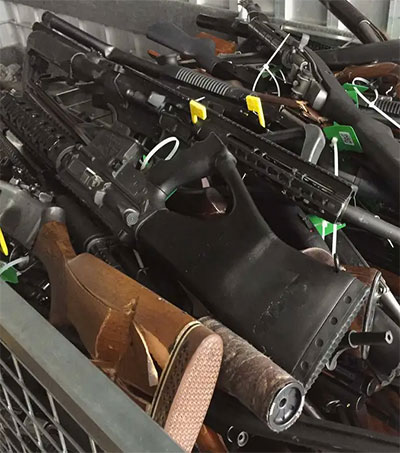 New Zealanders Turn over Their Guns

The first of more than 250 planned gun collections across New Zealand has been held in Christchurch. The buyback scheme was introduced after March mosque attacks in which 51 Muslim worshippers were killed, Deutsche Welle reports.

Dozens of gun owners in Christchurch handed in their firearms on 13 July in exchange for cash after the government began implementing a weapons buyback scheme.

Police said they paid more than $200,000 to 68 gun owners in the first couple of hours of the Saturday event in the city.

Police Minister Stuart Nash said that one of the objectives of the scheme, which went into effect last month, is to “remove the most dangerous weapons from circulation”.

New Zealand lawmakers passed a gun reform law in April. The government hopes the gun buyback scheme will rid society of the rapid-fire type used in the white supremacist attack on two Christchurch mosques on 15 March.

The government has planned the events around New Zealand as part of its gun buyback campaign. Nash said $208 million had been set aside to compensate owners of military-style semi-automatic (MSSA) weapons.

Mike Johnson, the regional police commander, said 903 gun owners in the Canterbury area had registered 1415 weapons to be handed in.

“Police recognise that this is a big change for the law-abiding firearms community. We are hearing really positive feedback from people as they come through today that they are finding the process works well for them,” Johnson told media.

Ray Berard, who moved to New Zealand from Canada 25 years ago, told reporters that there was no place for military-style weapons in modern society.

“My wife is working as one of the project directors on the hospital rebuild. We were there on the day of the shooting and watched the 35-odd hearses leave the next day,” Berard said after handing in an assault rifle. He said that a person can “do a lot of damage to a lot of people … if you are mentally unwell and you have a weapon that can shoot 100 rounds a minute.”

Gun owners have until December 20 to hand in the now-prohibited weapons, receiving up to 95 per cent of the wholesale price if new or near-new, 70 per cent if used and 25 per cent for MSSAs in poor condition.

Beyond 20 December, possession will be punishable by up to five years in jail.

Police have estimated that 14,300 military-style semi-automatic guns exist in New Zealand, where in total at least 1.2 million firearms are kept.

Given its population of near 5 million, that means New Zealand has the 17th highest rate of civilian firearm ownership in the world, according to the Small Arms Survey.