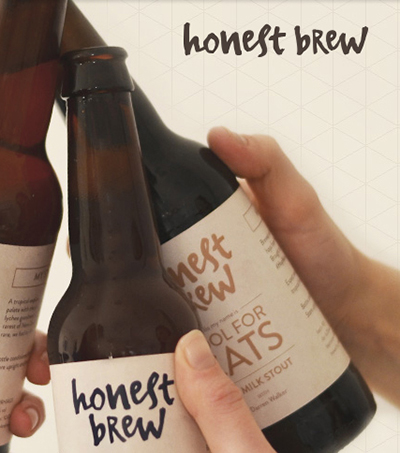 Honest Brew was started up in London by Andrew Reeve, a New Zealander who had long been a fan of both home-brewed beer and bitcoin.

The company specialises in craft beers from its own and guest breweries – including quirky labels like Weird Beard, BrewDog and Pressure Drop – which are packaged into the very Kiwi sounding ‘Honesty Boxes’ and sent direct to customers’ doorsteps.

According to the Honest Brew website, “The Honest Brew adventure began when Andrew arrived in London from New Zealand. Living in a cramped apartment limited his brewing at home so he set about creating a small and portable brew kit.”

In 2013, Reeve graduated to commercial-scale brewing at Late Knights Brewery in South London, after which he and his small team “brewed with hops flown in from New Zealand, dabbled in chilli and were even convinced […] to do a brew with woodlice”.

More recently, marrying a love of technology and beer, Honest Brew set up its online merchant platform to allow its wares to be sampled by a wider audience across the UK and Europe.

The company’s decision to accept bitcoin payments was down to this affinity for technology and an appreciation of the bitcoin community.