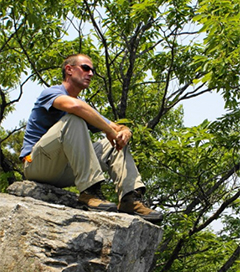 Former New Zealand police officer Roger Shepherd is preparing to achieve an ambitious goal – being the first person to hike the entire length of Baekdudaegan, the mountain range that forms the geological spine of the Korean Peninsula. The planned 1,440 kilometre walk depends on both the North and South Korean governments agreeing to his request, as no one may cross the border between the two nations without permission from both sides.

However, despite the current tension between North and South Korea Shepherd remains optimistic that the walk will go ahead. “Koreans often say that mountains are part of their DNA, part of who they are. When I talk about mountains in South and North Korea, people just ease up and talk about a subject that has no enemy.” He believes that such a journey has the potential to help Korea affirm their shared national identity after decades of separation, however it’s a sense of adventure that’s driving his plans. “It’s never been done before – any adventurer wants to be the first.”