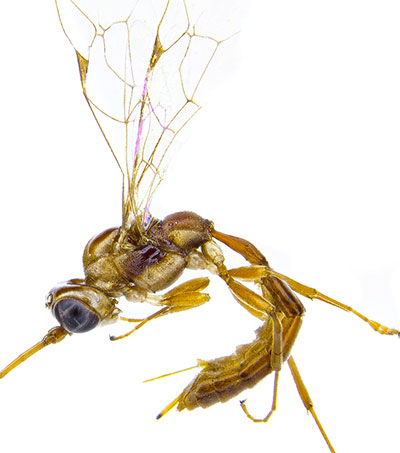 Auckland University entomologist and Harry Potter fan Tom Saunders has named a parasitoid wasp after “redeemed” character Lucius Malfoy in the hope of showing not all wasps are bad.

Saunders named and described the wasp as part of his masters study.

The wasp, which he called Lusius malfoyi, is one of 3000 wasps endemic to New Zealand, none of which sting or cause any problems to humans.

“The dominant narrative is wasps are bad and they sting people and they are awful,” Saunders said.

“But if you look at the diversity of wasps around the world you’ll find only a tiny fraction, less than 1 per cent are pests and problems. And the vast majority of them play a fairly critical roles in the ecosystems they live in.”

The wasp Lusius malfoyi was named after the fictional character Lucius Malfoy, who is the father of Draco Malfoy in the Harry Potter series.

Throughout the series the silver-haired Malfoy is portrayed as a slimy villain, who plots against Potter and his allies and works on behalf of the Dark Lord, Voldemort.

But in the final book of the series Malfoy is somewhat redeemed when he abandons Voldemort at the Battle of Hogwarts, and later gives testimony against the Dark Lord’s supporters.

“Lucius Malfoy is kind of redeemed, he kind of atones for his sins,” Saunders said.

“And I want to redeem the reputation of wasps, because at the moment people have a negative association of them, and they have bad memories from childhood of being stung. I want people to understand that only a tiny fraction of them are harmful to people and the vast majority are neutral.”