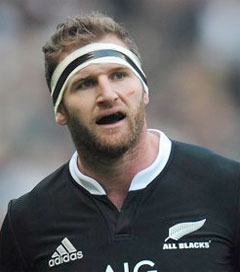 New Zealand have made a clean sweep at the International Rugby Board (IRB) awards once more, taking away all three major end-of-season prizes, with number eight Kieran Read named player of the year, the Irish Times reports.

His coach Steve Hansen, after guiding his side to an unprecedented perfect year (14 wins from 14) that culminated in that heart-stopping two-point victory in over Ireland in Dublin last month, has retained the coach of the year award, following the back-to-back wins of his predecessor Graham Henry.

Similarly, the team award was a foregone conclusion and also extended New Zealand’s uninterrupted run to four, with South Africa in 2009, 2007 and 2004 the only other team to win it in the last 10 years.

“The IRB player, coach and team awards bring the international Rugby year to a close and what a year it has been for New Zealand,” IRB chairman Bernard Lapasset said. “They seem to reach new levels of excellence every year and although some managed to push them very close, they were clearly the stand-out team of the year.”