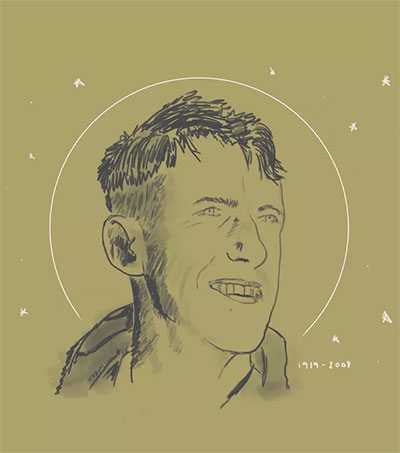 “I ended up in boat-drunk summery Auckland because I wanted to figure out, 10 years after Sir Edmund Hillary’s death, how the first person to climb Mount Everest ever happened. I promise that is not as insane a question as it sounds, particularly when you put him in context,” Spencer Hall writes for sports news website SB Nation.

“Sports gods are usually born gods, but it helps if they land in the right place, with the right parents and mentors, all at the right time,” Hall continues.

“Sir Edmund Hillary, though – nothing about him outwardly makes sense. He came from Auckland, as far away as a person could come, geographically speaking. Unlike a lot of adventurers and gentleman sportspeople of his time, he was not wealthy. He became a passable athlete eventually, but he started out in school described by his gym teachers as scrawny and weak. He had no obvious and immediate gift for self-promotion.

“Yet there Hillary is, grinning from the pages of my 1961 edition of the World Book that, as a child, I read cover to cover instead of paying attention to my teachers. For my entire childhood, that was the image of adventure, daring, and what today would be considered a deranged level of self-deprecation and humility.

“I wanted to see what Hillary’s seriously large legacy was in New Zealand and figure out if he was something beyond exceptional, or if the place itself had a lot to do with a humble beekeeper becoming a giant figure in mountaineering and beyond.

“Sir Edmund Hillary was lucky. He grew into being a strong athlete, was inquisitive, and had a giving spirit, but he also wound up in exactly the right place to shape him into what he would be.”