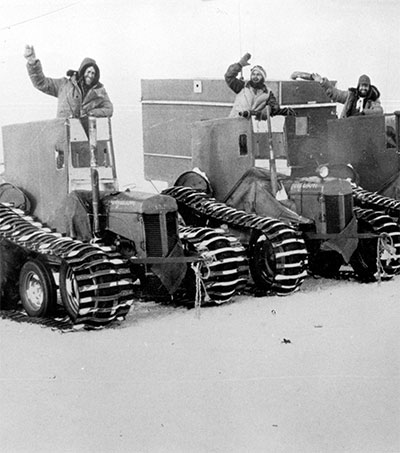 It was the first few days of 1958 and the two teams of the Commonwealth Trans-Antarctic Expedition were converging on the South Pole. Although it was not meant to be a race, New Zealand mountaineer Sir Edmund Hillary, in defiance of orders, decided to forgo a rest stop and pushed on to the South Pole.

Sixty years ago, on 3 January 1958 Hillary became the first person to drive to the South Pole, but a lot of Britons resented the fact that, just like Robert Scott in 1912, the Brits had again been beaten in a race to the pole.

The main team, which included English expedition leader Vivian Fuchs, was equipped with specially made snow mobiles, while Hillary’s team were on modified Massey-Ferguson tractors. The idea was that Hillary would set out from one side of Antarctica, dropping supplies along the route for Fuchs, so that when they met at the South Pole, Fuchs would be able to continue on, making the first complete crossing of the continent.

They were not really in competition, but the world saw it that way. When Fuchs was delayed on his way to the US South Pole Base and Hillary found himself running perilously short of petrol, the New Zealander decided to push on to the pole to be first there.

When Fuchs reached the pole on 20 January his first words to Hillary were “Damned glad to see you, Ed.” The two then combined forces to bring the expedition to a safe conclusion. Hillary later said that he spent much of this leg of the journey sitting in the dark in the back of Fuchs’s Sno-Cat, only occasionally being consulted to look outside to help with directions.