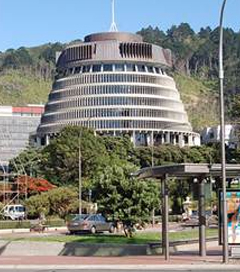 The New Zealand parliament has narrowly passed a controversial bill that opponents say represents a fundamental threat to democratic rights and freedoms. The new legislation allows the country’s main intelligence agency, the Government Communications Security Bureau (GCSB), to spy on New Zealand residents and citizens. Previously the agency was only permitted to spy on those with no right to reside in New Zealand.

The amendments to the legislation, which passed 61-59, was prompted following revelations that the government unlawfully spied on internet entrepreneur Kim Dotcom, a German-born New Zealand permanent resident, who is currently being sought for extradition to the US. GCSB worked with US officials to investigate Mr Dotcom over allegations of online piracy and money laundering. Mr Dotcom, has denied the charges.

Defending the bill, Prime Minister John Key said in parliament, “this is not, and never will be, about wholesale spying on New Zealanders.”

Adding, “there are threats our government needs to protect New Zealanders from, those threats are real and ever-present and we underestimate them at our peril.”

The Prime Minister also stated that the legislation “makes it clear what the GCSB may or may not do.”

The Guardian reports: “Green party co-leader, Russel Norman, argued that the legislation undermined freedom of expression. ‘It reduces our freedom to live free from state surveillance and in that respect is a bill that reduces the freedom of New Zealanders. It is the moment of truth,’ he said.”

“New Zealand’s spy agencies will be subject to an independent review every five to seven years, although the first such review will not take place for two years, after the next election.”